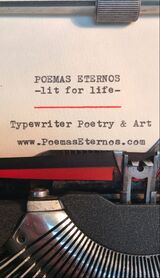 * Translation is an art and there are many approaches to translating poetry. In translating my own poems, I stay as close as possible to the original. I prioritize meaning over rhythm and metric, allowing verses to line up insofar as possible, so that readers who have some knowledge of the language can follow along. 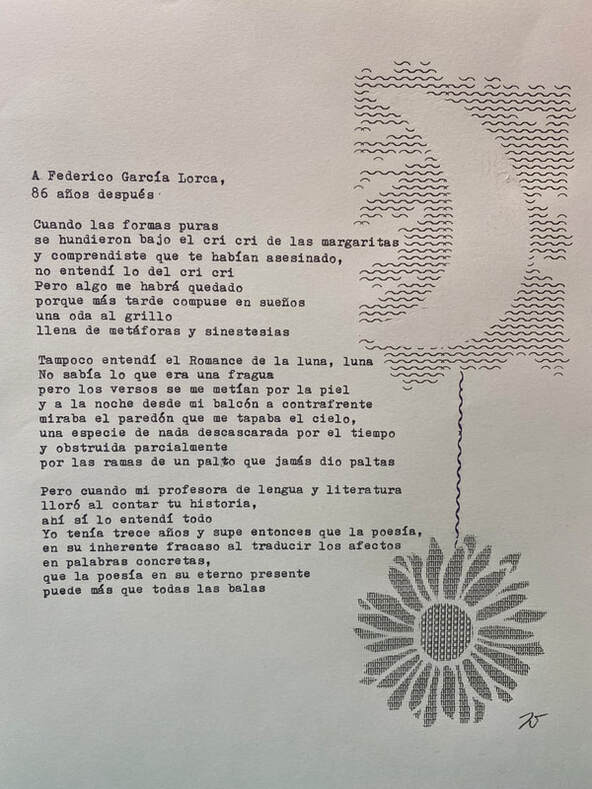 When the pure forms
sank in the cri-cri of daisies
and you knew they had assassinated you,
I didn’t understand about the cri-cri.
But something must have stayed with me
because later I composed in my dreams
an ode to the cricket
full of metaphors and synesthesias

Neither did I understand the Ballad of the moon, moon.
I didn’t know what a forge was
but the verses crept into my skin
and at night from my rear-facing balcony
I would stare at the wall that hid the sky away,
a sort of nothingness chipped off by time
and partially obstructed
by the branches of an avocado tree than never bore avocados

But when my language and literature teacher
cried while telling your story,
right there I understood everything.
I was thirteen and knew then that poetry,
in its inherent failure to translate affections
into concrete words,
that poetry in its perpetual present,
is more powerful than all the bullets. 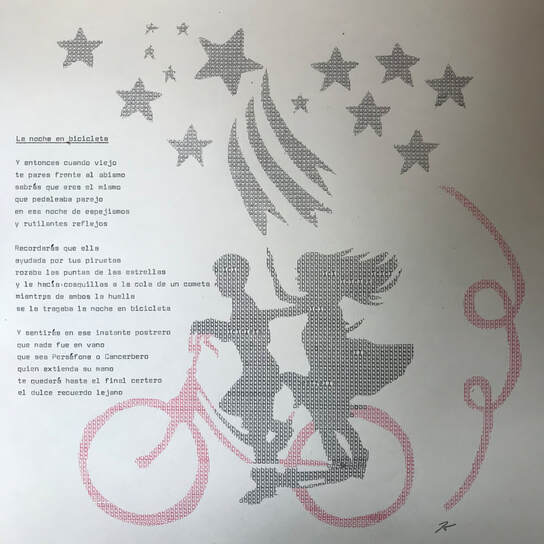 The Night on a Bike *

And then, when you’re old
and you stand by the abyss
you‘ll know you’re the same
who pedaled evenly
in that night of mirages
and glittering reflexes

You’ll remember that she,
aided by your pirouettes,
brushed the tips of the stars
tickling the tail of a comet
while the tracks of you both
were swallowed by the night on a bike

And you’ll feel in that last instant
that nothing was in vain,
that whether it’s Persephone or Cerberus
who extends a hand,
this sweet faraway memory
will remain until the certain end 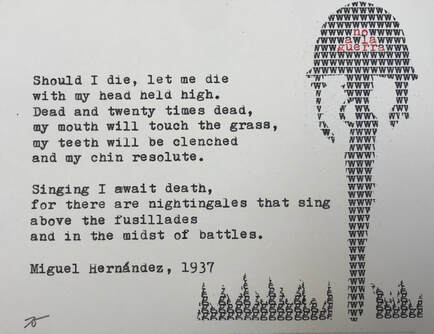 Miguel Hernández, From "Vientos del pueblo" - these are the last two stanzas of the original poem, whose English translation is my own 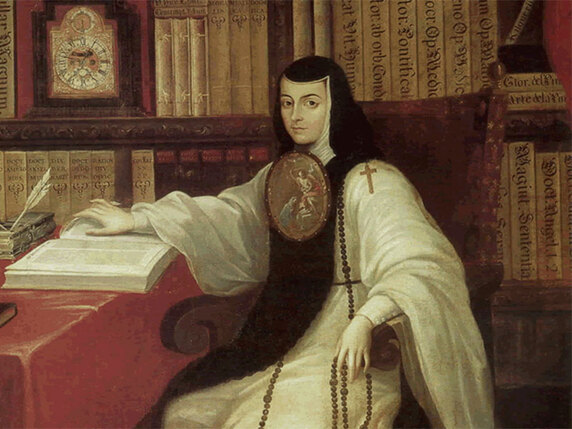 Born on November 12, 1651, (though there is some dispute about the year) in San Miguel Neplantla, Mexico, Juana Inés de Asbaje y Ramírez was the illegitimate daughter of a Spanish father and Creole mother. Her maternal grandfather owned property in Amecameca and Juana spent her early years living with her mother on his estate, Panoaya. Juana was a voracious reader in her early childhood, hiding in the hacienda chapel to read her grandfather's books from the adjoining library. She composed her first poem when she was eight years old. By adolescence, she had comprehensively studied Greek logic, and was teaching Latin to young children at age 13. She also learned Nahuatl, an Aztec language spoken in Central Mexico, and wrote some short poems in that language. At age eight, after her grandfather's death, she was sent to live in Mexico City with her maternal aunt. She longed to disguise herself as a male so that she could go to University but was not given permission by her family to do so. She continued to study privately, and, at 16, was presented to the court of the Viceroy Marquis de Mancera, where she was admitted to the service of the Viceroy's wife. When she was 17, the Viceroy assembled a panel of scholars to test her intelligence. The vast array of skills and knowledge she demonstrated before the panel became publicly known throughout Mexico. Her reputation and her apparent beauty attracted a great deal of attention. Interested not in marriage but in the furthering of her studies, Juana entered the Convent of the Discalced Carmelites of St. Joseph, where she remained for a few months. In 1669, at age 21, she entered Convent of the Order of St. Jérôme, where she would remain until her death. In the Convent, Sor Juana had her own study and library and was able to talk often with scholars from the Court and the University. Besides the writing of poems and plays, her studies included music, philosophy and natural science. Her small room was filled with books, scientific instruments and maps. Though accomplished, Sor Juana was the subject of criticism by her political and religious superiors. When her friends, the Viceroy Marqués de la Laguna and his wife María Luisa, Condesa de Paredes (the subject of a series of Sor Juana's love poems), left Mexico in 1688, Sor Juana lost much of the protection to which she had been accustomed. In 1690, a letter of hers which criticized a well-known Jesuit sermon was published without her permission by a person using the pseudonym "Sor Filotea de la Cruz." Included with her letter was a letter from "Sor Filotea" (actually the Bishop of Puebla, Manuel Fernandez de Santa Cruz) criticizing Juana for her comments and for the lack of serious religious content in her poems. Sor Juana's reply, the now famous Respuesta a Sor Filotea has been hailed as the first feminist manifesto, defending, among other things, a woman's right to education. Her fervent reply was the subject of further criticism, and the Archbishop and others demanded that she give up any non-religious books or studies. She continued to publish non-religious works, among them several villancicos (a poetic form typically sung as a religious devotional for feasts of the Catholic calendar) about St. Catharine of Alexandria, written in a more feminist than religious tone. Controversy surrounding Sor Juana's writing and pressure from those around her, including her confessor Núñez de Miranda, resulted in Sor Juana's forced abjuration. During this time, Sor Juana was required to sell her books as well as all musical and scientific instruments. Sor Juana responded by devoting herself to a rigorous penance, giving up all studies and writing. In 1695, a plague hit the convent. On April 17, after tending to her fellow sisters, Juana died from the disease around the age of forty-four. *
* This bio is quoted directly from Poets.org.
Read more poems by Sor Juana, in English, here and more or her work in the original Spanish, here.